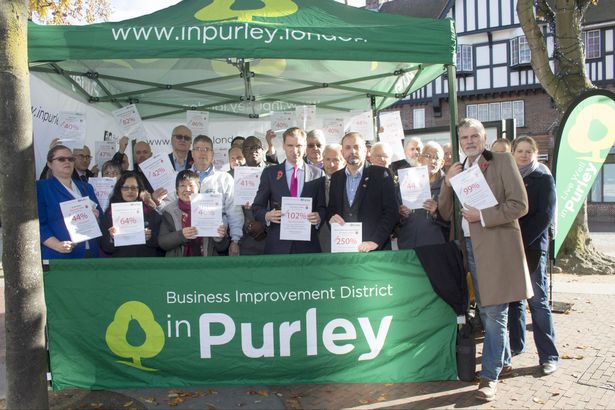 Purley business owners have launched a protest because business rates in the town centre are skyrocketing by an average of 48%, leading to fears the rise could hurt the high street.

The business rates are being changed across the country as part of a revaluation undertaken by the Government. But while many areas outside of London could see their rates fall, the capital is likely to see business rates rises, with Purley thought to be one of the worst-hit areas.

The 48% hike in Purley will be more than double the expected 19% business rates increase in Croydon town centre.

On Friday, business leaders and politicians from across party lines took part in a protest in Purley to highlight the rates rise and how it may affect the town centre.

Simon Cripps, CEO of Purley Business Improvement District, believes the government has got it wrong for Purley.

He said: “These rate rises are catastrophic to the local businesses, many don’t know how they can possibly survive, with several already planning to shut up shop and leave as the tariffs are too high.

When asked why rates are going up so much for Purley businesses, he said: “We wish we knew – that that is the main part of the protest.

“The whole country is being revalued and across the nation the average increase should be neutral.

“That has meant that many areas outside of London have gone down, while London has gone up.”

According to the BID, business rates should be revalued every 4 years, however the last one was in 2010.

Mr Cripps said: “We call on the [political] parties of all persuasion to work at fixing the amounts already imposed and to implementing a fair solution.”

Conservative GLA member for Croydon and Sutton plans to raise the issue with the Mayor of London.

He said: “I am a regular visitor to Purley and often use the shops and services on offer.

“It is quite clear speaking to the business owners that they are struggling with these new rates increases and some fear that they will not be around for much longer.

“I will do as much as I can to support the campaign to review these rates increase.”

Purley BID is campaigning against the rates increases increases, which it describes as “unreasonable”, and is challenging the Valuation Office Agency (VOA), which undertakes revaluations of business rates for the Government, to review the rating across Purley to a fairer level.

The increase is meant to be related to the rentable income of the properties.

However, research from the Purley BID team estimates the VOA is charging rates of about 15% higher than the rent.

A BID spokesman said: “Some of the businesses don’t want to pass the increase on to customers so they are absorbing the costs themselves.”

There is a discretionary rate relief that businesses can apply for, but this was derided by the BID spokesman who said the relief is: “a short-term sticking plaster”.

“After about two or three years [businesses] will fall off a cliff.”

BID also said London has 13% of the rateable properties but pays 32 percent of all the business rates nationwide.

Labour Councillor Mark Watson, cabinet member for economy and jobs, has also raised concerns around the business rates review and the impact it will have on the small business community in the borough.

He said: “I believe that many Croydon businesses will struggle to meet the increased bills and this will have a significant impact on our growth as a borough.

The BID confirms it will continue its lobbying efforts against the hike and recommends that people who want to help their Purley businesses should buy locally.